As always, click on any photo to see a super enlargement! 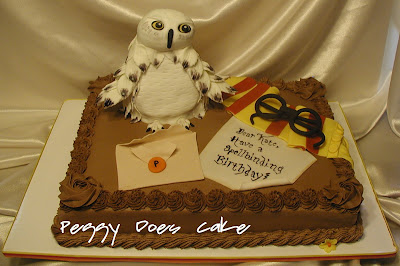 This Harry Potter cake featuring Hedwig the Owl gave me one of the biggest, greatest thrills of my life. I kid you not. Cake itself was triple chocolate chip cake torted and filled/iced with whipped chocolate buttercream. The only things our birthday girl, Kate (age 9), asked for was that the cake be chocolate, not "too" girly, and that it featured Harry's pet owl, Hedwig. 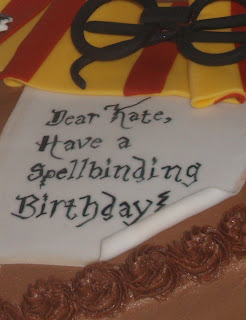 I downloaded a font called "Parry Hotter" (for real!) and copied the note in black food color (thinned with vodka) onto fondant made to look like antiqued parchment (fondant rolled at the edge and brushed lightly with brown food coloring). Ha! I asked my online friends for ideas as to the wording for Harry's letter to Kate and got great feedback. In the end, the "spellbinding" thing won over the more over-used "have a  magical birthday." Thanks to everyone who helped with that!
Here's the part that gave me such a thrill: the big birthday bash was held at one of our more “upscale” local theaters (in Madison, MS) and coincidentally, that very day they were hosting a big fund-raising benefit and premier showing of the movie “The Help” starring Emma Stone and Viola Davis. (Parts of the film were shot in and around this area, so it made sense for this premier and fund raiser to take place here.)

The theater was closed except for the fund-raiser and except for Kate's Harry Potter party. According to the news, they had as many as 4,000 people outside the theater and tickets for the premier ranged from $300 to $500 per seat. Since the birthday girl’s mother had booked her theater party (for an early showing of the final Harry Potter movie) months in advance, the theater kindly allowed the party to remain on the books while the premier was happening. 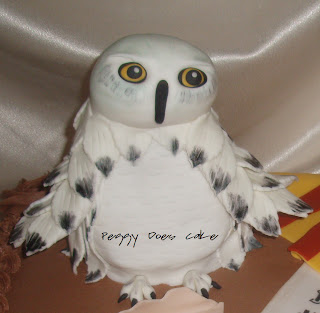 When family and friends began singing happy birthday to Kate, the cast and crew made a surprise visit into the party room and joined in the singing and celebration! And yes, they ate cake. Kate’s mom told me several of them even came back for seconds. I will update this post with photos if I ever get my hands on them, but for now, this is all just hearsay.  But still true. ;)
I know it’s ridiculous, but I was high for a month knowing Emma Stone ate my cake haha.
Oven’s on – I’ll be back soon!
~ Peggy
Posted by Peggy Does Cake. at 7:51 PM 3 comments