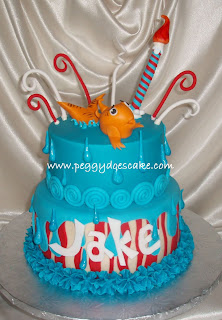 I really wanted to slap some whimsy on this Dr. Seuss-themed cake via making it a topsy turvy, but alas, I was too chicken. The last time I tried one of "those" cakes (insert sneer and rolled eyes), I made a terrible mess. I WILL conquer that technique in the near future, though. That's a Promise with a capital P - and I don't use the "p" word lightly, much less capitalized. Cake was WASC with vanilla buttercream filling/icing. All accents were fondant. As always, everything was 100% edible. The idea of all the blue, obviously, was that the fish was supposed to be splashing around in water - but I think I got a little carried away.  A bit of blue overkill perhaps?  Other requests for the design included a fish on top, red and white striped bottom tier, and a funky candle on top.

I was also asked to "try" to make the fish hold the candle!  Hehe at how cute that would have been, but try as I may, I just couldn't work that part out. :(  Thanks to CC'ers "meghanb" for the candle inspiration and "KarolynAndrea" for the curly Q inspiration. Also, a big shout out and thanks to cake artist Fran McGregor for the fish design and the roly poly border design on the top tier. Yes, I'm confessing that although I put it all together, most of the ideas for this cake were flat-out stolen.
Jake's mom was kind enough to share some photos of the big party with us. I love love love what she did with the table seen here: 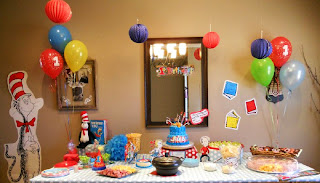 She was also kind enough to let me nab some pictures of the birthday boy on his big day. His pictures were so adorable I couldn't pick just one.  Happy birthday Jake! 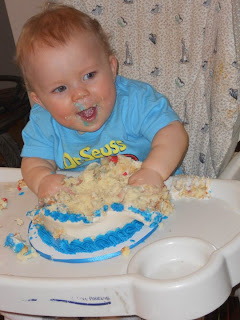 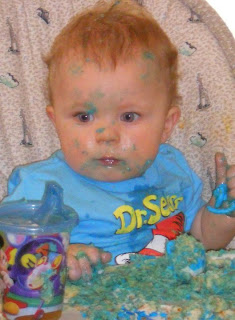 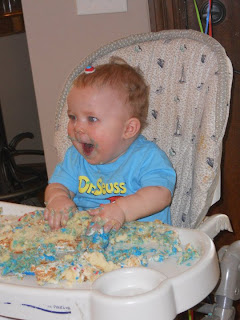