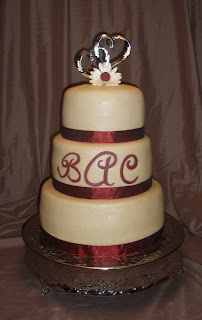 Carmen and Brandon's wedding cake was, by far, the most difficult cake I've ever made. Carmen wanted "champagne" fondant with burgundy ribbon, and that was it. I was terrified because a cake like this leaves no room for any errors.  You can't hide a flaw in the fondant with a flower or a leaf or a polka dot... so it had to be perfect.  I was a nervous wreck making this cake and even more nervous driving this thing 60 miles down the road this morning to deliver it.  This cake held another set of firsts for me:  it was the biggest cake I've ever made, it was the first 3 tiered cake I've ever made that was completely covered in fondant, and it was the first time I've ever tried covering an entire cake in homemade marshmallow fondant.  Brave!  The cake was white almond sour cream with a whipped vanilla bean filling and icing.  After I covered it in the fondant, I painted it with a combination of gold and pearl edible luster dust to make it shimmer.  Too bad the reception was inside, because as my husband carried it into the reception hall I noticed it glistened in the sunshine like Edward.  (Lame Twilight reference.)  The bride provided the topper and I popped a giant gerber daisy (also painted in luster dust) on top for a better visual weight.  (Wonder if the bride left the daisy there or removed it...)  As I was leaving, I did notice that her bouquet had gerber daisies in it, so woo on that lucky guess!!  The woman who runs the reception venue wanted to put this cake on a pedestal that would lift it higher, but when she tried to pick it up and realized it weighed so much, she quickly dismissed that idea haha.  Phew! I'm glad this bad boy is over and done! 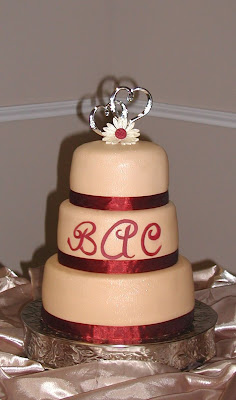